“For a 550 it was a very big boat in every sense of the word! Which, of course, is great for offshore fishing, or any sort of fishing, for that matter… more for the money is the way to go.” by Wayne Kampe Link to original post: www.FishingMonthly.com.au

“It’s been a few years since I had the pleasure of reviewing one of Formosa’s Tomahawk craft, but as is always the case with renewing acquaintances with old friends, it was again an enjoyable experience. The Formosa’s eye catching good looks, courtesy of a decent lift in the forward sheer line plus a rakish swept back stern area leading to the engine pod with it’s boarding ladder and side rails, were still as attractive as ever.

Proud as punch on a tandem Redco Sportsman trailer, the 550 Tomahawk Offshore was certainly a larger rig than I’d previously enjoyed. For a 550 it was a very big boat in every sense of the word! Which, of course, is great for offshore fishing, or any sort of fishing, for that matter. With boats, more for the money is the way to go.

To me, it’s pretty obvious that the new Formosa Tomahawk V2 hull has moved the Formosa line right up to the minute. A sharper 18° deadrise hull has been combined to outer reversed chines for enhanced overall ride and stability. Increased floor rigidity sees an underfloor construction that locks stringers and multi cells directly to bottom sheets. The 550 featured Marine 5083 high tensile 4mm alloy sides and bottom, although Formosa craft over 6.2m in length have 5mm bottom sheets as a bonus.

The Offshore Tomahawk’s self-draining decks range from 4.8-7.4m in size, so there’s certainly a wide range to chose from. The diversity also extends to design, with side and centre consoles sharing kudos along with centre and half cab rigs, plus a runabout and bow rider to round off the Aussie made line up.

The six-person 550 Tomahawk came equipped with numerous features to qualify it as a genuine offshore craft. Metre high sides linked to a beam of 2.45m ensured huge amounts of work room for five or six to fish in comfort. A 500mm high raised deck up front complimented the big cockpit aft, with both areas being carpeted for comfort and stability. Under floor storage bins up front were designed to cater for tackle, clothing, PFDs and safety gear, while a large plumbed fish box aft was for the day’s catch.

Seating was for five in the test rig, with three floor spigots aft, two more ahead of the console with its Suzuki digital multi-function gauge and switch panel handy to the skipper. A Garmin echo map 955V sounder plotter was console flush mounted above the rig’s five-spoke sports wheel, and while a slightly larger sounder unit might also fit there, a big 16” job would require a RAM bracket to set it up.

I found the standard console, as fitted, was obviously designed to maximise the fishing area, yet was large enough to fulfil its role as a central helming station. Note that an upgrade to a larger console is on Formosa’ option lists.

Aft within the cockpit area side pockets offered storage of items around a metre in length, the pockets being broken into paired segments. This did surprise me, as most craft of this size offer full length side storage compartments in work areas. I did note that Formosa advertise customisation of their craft and extra long fishing rod lockers are on the list of options, so no doubt a potential owner wanting larger side pockets could discuss the matter prior to construction.

That small matter aside, there was no complaint about the usefulness of the transom area, with its large bait station, cutting boards, rod holders and a live bait well. At a sensible height for easy use, the bait station was equipped with a hinged lid, a neat and quite user-friendly arrangement. 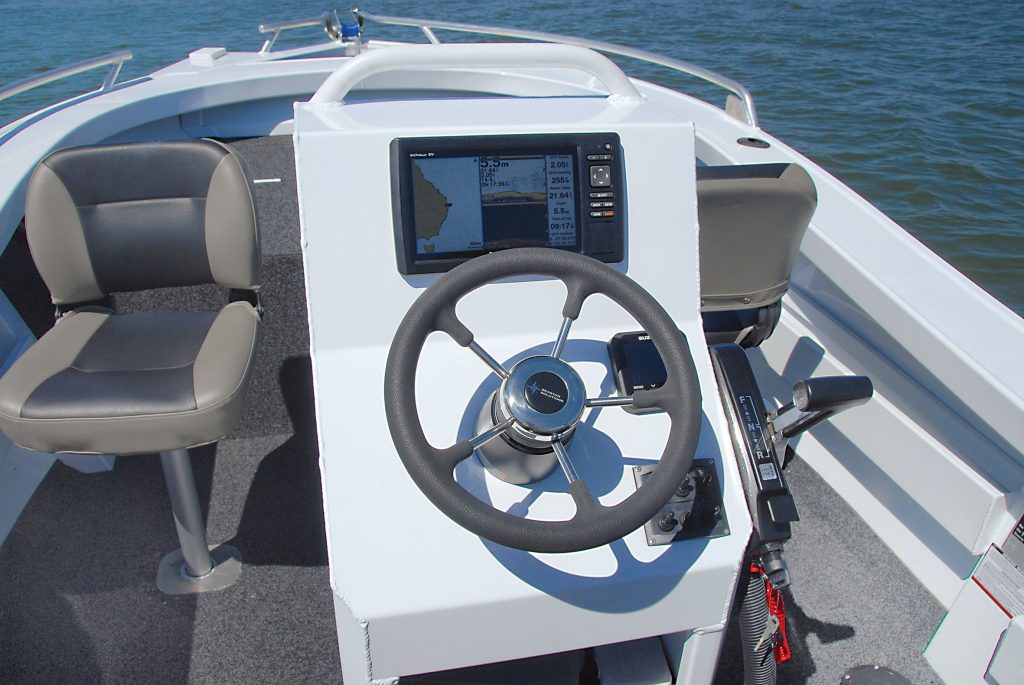 Centre consoles vary in size as much as the craft they are fitted to; the Tomahawk’s was obviously designed to optimize fishing room but still do the job.

Doubtlessly with the Suzuki 140 fully run in, 70km/h and beyond would be the hammer down pace. Just like the last Tomahawk, I drove the ride was quite good. Bumps and thumps from wave action around the Jumpinpin Bar area were hardly felt and the hull exhibited a refreshing lack of noise upon wave impact. Formosa have certainly ticked some boxes, with the design and set up of their new V2 hull, which certainly provides a lot of sea keeping and ride confidence for an owner wanting to use the craft for serious fishing pursuits.

As an offshore fishing rig, the big Formosa 550 Tomahawk makes a lot of sense. About the only change I’d envisage would be to request one section side pockets. I liked the flexible seating layout, the huge amounts of internal freeboard, the vast work areas all around the craft, and last but not least, the great ride and easy handling of the rig mated to inherent stability.

As tested, the craft would come home for $61,950. A 115 Suzuki on the transom would see a base rig come home for around $51,920. The reviewed Formosa was provided by Australian Marine Centre at Springwood. Visit www.amcboats.com.au.
You can get in contact with them at (07) 3808 7333 or by emailing sales@amcboats.com.au. You can also visit www.formosamarineboats.com.au.